The Seychelles – everyone who went to the first boogie ever held on this group of islands in the Indian Ocean agreed on this, you jump in pure paradise…

At the beginning, it looked as if someone had drawn an irregular line with a pencil on the border between the blue sky and the even-bluer sea. But, with every minute that the plane approached Mahe, the international airport of the Seychelles, this line became more three-dimensional and clear.

At the latest, during the landing approach, one realized that the clichés of a palm island apply here. A sandy beach so white that it hurts the eyes. The sea deep blue. The sky loosely decorated with fleecy clouds.

After landing, the impression was reinforced on the short walk from the plane to the arrivals hall. The spicy smell of the nearby sea, coupled with pleasant 28 degrees and a steady light breeze that made the high humidity bearable. Onward to the final leg of the journey with a strange feeling… In a Twin Otter with seats? Without a rig ?!!! Like many island airlines, Air Seychelles “abuses” this beautiful jump plane for normal scheduled service. That the onward flight to Praslin took about the same time as a flight to jumping altitude was certainly no coincidence.

20 minutes later with a winding uphill and downhill ride through a palm jungle we reached the drop zone. Not a typical dropzone but a part of the former weekend residence of the President of the Seychelles. Located directly on a spacious beach with fine white sand under palm trees, we found sunbeds, jetskis and stand-up paddle boards in addition to the things you find at normal dropzones.

After checking in at the hotel, a swim in the 30 degree warm sea was the order of the day. However, it is necessary to apply a thick layer of sunscreen with a high sun protection factor beforehand. The Seychelles are located 7 degrees south of the equator. Thus, the sun burns fiercely from above all year round and even the shady clouds are no protection against sunburn.

Of course there are other ways to get there, at least for the last leg. Freefly world champions Karine and Greg from Airwax came by DZ boat from the main island; there is also a normal ferry connection. Pete Allum, who would learn during his stay here that he will be inducted into the Skydiving Hall of Fame, even arrived a few days early to enjoy the sun and beach with his wife, Anne. Freefly co-inventor and World Champion Omar Alhegelan (also in the Hall of Fame) took the chance to arrive and spend a few days with his family. Will Penny, also world champion, completed the absolutely top-class lineup of the load organizers. They were joined by Augusto Bartelle and Ewan Cowie and Ralph Wilhelm behind the camera. After all participants had arrived, it was time for the briefing – a  welcome change between eating, lying on the beach and speeding over the water with a jet ski at 100 km/h.

The next day we drove to the airport on the back of the drop zone truck. The road led through colorful villages, past the sea and through the dense jungle; a rather unusual way to the airplane!  The plane was also rather unusual, a Dornier 228 of the Seychelles Air Force. Normally used as a maritime reconnaissance aircraft, the parachutists were told by pilots to please keep their hands off the buttons of the radar system in the cabin. Also rather unusual was what happened in the aircraft after takeoff. There was a lot of smoke in the cabin. Due to the high humidity, the air conditioning system switched on by the pilot first caused heavy clouds of mist in the cabin, but at the same time spread a pleasant coolness. Even at 4,500 meters it was not cold after opening the door. So practically all jumpers, no matter what kind of jump was planned, chose shorts and T-shirts instead of long suits or booties. It was similar with the footwear, many of the participants jumped in sandals or even barefoot.

Barefoot was also the predominant footwear fashion on the ground. This went well because not only the drop zone and the hotel complex but the entire country was extremely clean. From other countries of this latitude, one is used to the sad picture of a lot of garbage on and next to the street. The Seychelles are a very positive exception here, since neither above nor under water garbage was to be found. The fact that the inhabitants take care of their paradise was noticed very positively by many of the participants. The same applied to the treatment of animals. These are treated here consistently well. Even stray dogs were treated kindly by the locals and all gave a well-fed impression. A point that says a lot about the people in the Seychelles.

“If there is a lot of light there also will be a lot of shadow”, says an old proverb. And in the shadows there were indeed dangers lurking in the hotel complex. Not in the form of crime, which is very low in the Seychelles, but in the form of giant tortoises. If you wanted to shortcut from the restaurant to your bungalow after dinner in the dark – you’re near the equator, and it’s dark at 7 o’clock – and leave the lighted paths to do so, you could easily trip over one of the numerous giant tortoises roaming freely on the grounds. During the day they have a similar task as sheep in many countries, they serve as lawn mowers. At night, they just lie around somewhere in front of the drop zone or in the hotel grounds and serve as obstacles.

The landing areas, on the other hand, were completely free of obstacles. Zone 1 was directly in front of the hotel and dropzone on the beach. Up to 3 km long and, depending on the tide, up to 50 m wide. At high tide, however, this landing zone shrank to a few meters, so the LZ moved to the other end of the 3 km long bay, which has the beautiful name Gold Coast. Here, even at high tide, the landing zone was at least 10 meters wide and more than 200 meters long, and thus easy to hit even for less experienced participants. And of course the sea was an inviting playground for the swoopers who, regardless of the water level, performed their final approach fast and low over the water.

In the air itself there was something for everyone according to skill level and discipline. Pete Allum, assisted by Omar Alhegelan and a group of bellyflyers, wrote the letters S E Y C H and L in the sky in three sequence jumps, which were then assembled into SEYCHELLES in a photo. All participants noted, braking and turning/shifting without a suit or booties is completely different than with the normally proper attire.

Participants who had a little over jumps were taken on their first hybrid by Karine Joly. This was a fun experience with a world champion that one could rarely realize with such a low number of jumps. The freeflyers were strictly vertical as well as angled. Often, due to the high density of load organizers, in small groups. Wish concert over the paradise. Thus, there were beaming faces on all participants after each load, far above the level of what is known from a cool jump at a normal dropzone. To which, all participants agreed, the picture-perfect background also contributed significantly.

And when everyone thought it couldn’t get any better, the organizers (www.skydive.sc) went one better. An injump to La Digue. The fourth largest island in the Seychelles has bays that could come straight out of a tourism advertising brochure. In fact, many commercials have been filmed at these beaches because of the extremely white and soft beach, the large granite rocks, the palm trees and the coconuts. So perfect, it almost seemed kitschy. And to top it all off, skydivers have never landed on this island before.

After the beautiful jump, however, ugly sport was the order of the day. Since there were hardly any cars on the island, we went by bike from the landing bay on the east side of the island to the ferry on the west side. At 30 degrees, of course, over a small mountain. To cool down the fresh sea breeze on the way home with the open boat directly to the hotel then was perfect.

On the last day there was again a special jump. The sunsets were all fantastic as seen from the beach. So, the idea was to experience this spectacular vista in freefall. Four world champions (Karina, Greg, Omar and Will), three participants and one camera jumper made this wonderful experience in head down. This made the beer, which was served directly at the beach after the last jump of the day, taste even better.

Thank you Seychelles, we will be back! 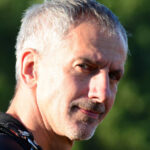 Ralph Wilhelm is from Germany and he started skydiving in 2007. He has accumulated more than 5000 jumps since.

He is a successful bigway jumper with several world records in FS - belly and several national records in freefly, but these days he prefers to be camera flyer on bigway events, no matter if they are in belly or freefly.