We made the news recently. We didn’t mean to.

But, you know. The Internet.

Our 14-way FS group assisted our pilot to stall our aircraft during the climb-out sequence on a 16,000 foot jump run in October 2021. I was the Load Organizer and must assume some responsibility.

In the interest of community education, we decided to publish to the internet a formal version of the OKAS video incorporating a first-person account by both the pilot and the videographer (after the SA-CAA had completed their inquiry).

Then social media took a grip, and we were off to the races; making news and enemies across the globe 😀

My qualifications for an opinion…

Are only as good as anyone else’s really. I am not a pilot nor an aero-engineer, nor a particularly technically-minded skydiver.

However, I was involved in all aspects of the OKAS, I’ve been party to three separate stall incidents that I can recall (caught both inside and outside of the ac) and I’ve enjoyed a few thousand jumps from various planes across countries. For assistance here I have also consulted a highly experienced jumper-pilot friend for some tech info and fact checks.

All that said, nowhere is there a SOP for skydiver stall-engagement so my experience and thoughts are as good as any I reckon. Learning is the objective and I’m happy to offer my opinions.

So, what’s to be learned from our little adventure? The obvious questions to swirl around:

Let’s begin by acknowledging that these things happen. And likely way more often than we realise. We participate in a sport that stresses the edges of the envelope in places, with the climb out / exit sequence a particular case in point.

This King Air incident become an item of high interest for pilots, skydivers and the public in general only because it was superbly filmed (with a beautiful and dramatic sky behind).

Planning, communication and practice are the tools to reach for in prevention.

It is easy for me to see in retrospect that we pushed a little too hard too soon, not allowing everyone to familiarise in these seldom-practiced roles. In short we were not yet dialled-in.

An aerodynamic stall results when the flow of air over an aircraft’s wing separates and thus the wing stops generating lift. Assuming that a pilot is managing airspeed correctly, the stall results from the wing exceeding its critical Angle of Attack (AoA). Importantly, a stall can occur at any speed.

The AoA is exceeded either by a pilot’s intentional input via the elevator or is inadvertent when the mass within the aircraft moves too far aft, and this shift exceeds the pilot’s ability to counter with the elevator control – that authority requiring clean airflow over the elevator.

On a jump plane add to this recipe the fact that the mass has also biased to either the left or right of the ac (depending on the door) and that, as the floaters position, there is substantially increased drag to manage. Our jump pilots are busy up there!

Should a stall occur in this circumstance then there is an obvious susceptibility for the aircraft to enter into a spin because of the significant left or right bias.

As the moment of stall approaches (quickly), depending on the design of the wing the feedback into the aircraft may differ. I’ve experienced a ‘shuddering’ at just before stall moment on the PAC750. Faster aircraft such as the King Air may be more susceptible to a ‘clean stall’ with no buffet or shudder. Personally, in the OKAS I felt no shudder but rather a sensation of ‘mushiness’ / ‘wafting’ underfoot. And the airplane’s nose simultaneously came up steeply, which in my inside-door position meant that my right side of body moved higher than my left side. Despite the difference of the feeling in the King Air as compared to the PAC, it was completely obvious to me that this was a stall in progress.

All the tell-tale indications are short-lived. Just a second or three because the pilot is already losing control of the aircraft and is way past the audible stall-warning when these symptoms manifest.

So, you did all the sensible things we agreed at the prevent / avoid section, but Mr Murphy has nevertheless decided to pay a visit… now what?

Be completely clear on this: Your pilot is NOT going to be recovering the aircraft with you and your team in exit / door slots. Help the pilot and help yourself. Go now!

The sooner you respond the more chance of getting everyone into the atmosphere. Yes, of course the exit timing will now be a breakfast. This is a way better problem to solve than having some of your team trapped inside the freefalling ‘plane.

Once out, find the base as you would normally, or if you are the base, orientate as quickly as possible so that you present the visual target that your team needs. Get on with the dive as best you possibly can. This is the safest thing you can do within your control. Follow the lead / signals of the LO or anyone else that is taking authority in the dive as any ‘plan B’ may be put together.

If it occurs that the stall has rendered you unable to exit and you are trapped within the aircraft, then brace yourself into a position so as not to be ‘a marble in a can’, to the best of your ability. Do not touch or interfere with the pilot at all. And, do all that you can to physically position yourself at the wing-line of the ‘plane. This positioning will assist the pilot with the recovery procedures by neutralising your mass around the aircraft’s centre of gravity (CoG). (Generally the CoG is about one third back from the wing’s leading edge).

We got real lucky with the OKAS.

Those trapped inside had by far the shortest of the straws. It is confusing and distressing to be caught up in multi-seconds of a powerlessness to control your world.

Those of us that made it out immediately were mesmerised and appalled to find ourselves in proximate flight with an aircraft, and with very little control to avoid a potential contact.

These are circumstances worth avoiding. Getting lucky is a weak strategy. Planning for avoidance is a better one.

I believe that our formal video-release strategy has worked. I’ve been really pleased to see a number of respected aircraft-incident analysts making high praise of the video quality; enabling them to make detailed commentary on the aerodynamic realities, as well as thoughtful viewers (usually pilots) appreciating the lessons and chipping in to expand knowledge further.

Of course, a few haters too.

But, you know. The internet.

The original publication has a verbatim transcript of the pilot’s actions / response: here

Authoritative aviators have submitted analyses that I’ve found useful to understand the dynamics of aircraft in upset recoveries. Some interesting extracts and video analyses are included below…

[NOTE: The Caravan is a high-wing (generally more stable) aircraft, and yet this pilot was maxed out on occasion]

“(4,000 paradrops in a previous life) … I had a very close call in a D18-S during a jump run, to the point that my yoke was all the way forward to its stop, both engines powered up to the max and we were still heading more and more upward! Upward until they all let go, feeling a mushing floor under their feet… I was initially carrying the same airspeed and configuration as usual, it’s just that too many literally lunged in the back of the plane/hanging outside at the same time.

“Lots of jumper ops in my logbook, including the BE90… As a jumper and a pilot, the King Air is … very pitch sensitive compared to other platforms like the Otter and Pac750 … This was a great learning experience for them, other pilots and other jumpers without any blood being shed.” 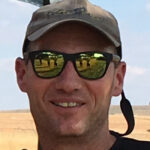 Simba aka Paul Marcellin - maternally Scottish, paternally French and by all other measures South African.
Primarily focussed on FS4 and FS8, represented SA in both on a number of occasions. AFF instructor with 6000 jumps.
Lucky participant on the WorldTeam 400-way and somewhat surprised to have become a LO. Faking it until they find out I don’t know what I’m doing :).