Seth owns and runs the Swedish Stunt Group, which has just rigged stunts for the recent film “Uncharted”, with Tom Holland, Mark Wahlberg and Antonio Banderas

Uncharted was released on February 16, 2022. You may have seen commercials for Uncharted online. Where Spider Man himself, Tom Holland, talks about how the stunts in Uncharted are the wildest and most difficult he has ever participated in? Those are big words from a man with extensive experience from movies in the Marvel universe.

Video: UNCHARTED – Behind the Scenes

Seth has long and broad experience in the stunt profession, and has specialties in rigging and motion capture. In Uncharted, there were extremely many people involved in making stunts. Tom Holland, for example, had two full-time stunt doubles, which is very unusual. And on Seth’s rigging team they were 30 men. And they were not the only team.

What exactly is Stunt Rigging, Seth?

“It’s everything that has to do with liner really. Everything to be hung up, or pulled, or something.”

Have you been involved in creating the stage with the cargo boxes that hang out of the plane? I ask, referring to a scene that has been shown in the trailer.

“No, I was not exactly involved. But we have, for example, worked on a scene with a large boat flying, or if you have seen the scene when we drive a car into Tom Holland, and out of a Hercules.”

The scene with the car is shown after 0:30 in the video below.

Seth had the most contact with stunt doubles in Uncharted, and specifically Tom Holland’s two. He is full of praise for them. Luke Scott and Greg Townley have also starred in the Spider Man movies. Both the stunt performers and Holland himself were highly professional and pleasant to work with.

How did Seth become a stuntman?

Seth knew from a young age that he wanted to work on stunts. He started with stunts before becoming a parachutist. And the stunt strength is the only reason he started jumping. In 1992, he began stunt training in the United States. And it soon became clear that this was something he had a talent for. He was the best in the class, and became very sure that this was what he wanted with his life.

He took advantage of his background as an athlete. Seth is, for example, a Swedish champion in turning, but also has experience in martial arts and climbing and more. But Seth’s teachers at the stunt school pointed out two shortcomings of the super talent. He did not scuba dive, and he did not skydive. So then Seth thought “Well, then I’ll probably do it”. Seth started jumping already in 1993, and completed five jumps on the first day. The last jump was technically a night jump.

Seth fell in love with the jumping environment from the first second. The humor and community made him feel welcome immediately. He spent much of his time in the sport of jumping as a cameraman. But before the World Cup in 2010, he joined the Swedish national team in FS4, and beat the undersigned by a small margin in Russia. Two years later, his team averaged 19.1 during the World Cup in Dubai. In recent years, Seth has been on the European eight-team QRF1, which has won several medals in major international wind tunnel competitions, both in France and in the United States.

Seth is also one of Scandinavia’s foremost experts in motion capture. If you’ve played the Battlefield series, for example, chances are you’ve used Seth’s hands to kill an opponent.

Motion capture has its own challenges. It’s harder to cheat. Seth says:
– “If you are going to play someone who is shot, or beaten down or the like on film, then you can have several camera angles, and make dramatic cuts, which together look like a realistic fall. Including head impact.”

But in motion capture, you do not have that opportunity. In a game, you always see from the player’s point of view, so the whole movement must be made realistic in one take. This places much higher demands on the stunt performer, and it is riskier. In addition, you must make significantly larger movements on, for example, breathing to computer games, because otherwise the people only look like statues. Motion capture is a completely different art form.

Theater is the Best

I ask Seth what is the best thing he knows to work with. And at the top of the list is theater. Here you get to work with the actors over a longer period of time, and get more creative freedom. He specifically mentions a production of Dr Jekyll & Mr Hyde, where he was given the opportunity to go in depth with the motivation of a murderer, and his psychological development. Seth actually got to help write parts of the script, and invent different types of murders, which drove the emotional development in the story.

“I was a violent director”, Seth smiles.

It was an opportunity to go in depth with the creative process, in a small team, where there was great trust between the parties involved.

Seth has also managed to excite animal friends in the US, through a small commercial for a Swedish insurance company. One must praise the Swede for making good visual effects, when CNN made a report that people were in uproar, because they thought Seth had really thrown cats out of planes. He’s not that violent a director`! No felines were harmed in the making of the commercial. 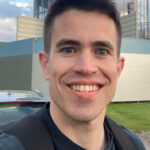 Kjetil has been skydiving since 2003, and is currently the chief editor of frittfall.org (Norwegian membership magazine). He is a 16 times national champion in formation skydiving, divided between his two home countries of Norway and Denmark.