Hello, my name is Coralie Boudreault. I am the Canadian freestyle champion and I have the privilege to be one of Cookie’s sponsored athletes.

If you liked the shape of the G3 you will be pleased with the G35. The back of the head is higher than the G4 and it is comparable to the G3. Also, the G35 and G3 are smaller than the G4. Regarding the padding, the G35 is similar to the G4, it has very thick padding which makes it feel smaller. Another update on the G35 is that the chin cover is longer so it’s harder for the helmet to slip off your head.

The visor system of the G35 is the same as the G4 so the visor goes into the helmet.

This is one of the big changes. The G35 has an interchangeable top plate. It gives you the opportunity to have only one helmet for both sky and tunnel. You can take off your camera set-up and put another top plate before going in the tunnel! You can also order your plate in different colours if you feel creative. It’s possible to install a release system for the camera as well.

Finally the question that everybody wants to know, is it Impact rated ???

The G35 is not impact rated but like I mentioned earlier, the padding is thick and protects the head very well. It might not be certified but it sure feels like it!

Here are some things to check before buying… Based on the G3, the G4 feels bigger and the G35 is smaller. All my helmets are size small, but the models fit very differently (see picture for size reference). Another thing to check with the G35 is the audible pocket. It is smaller than the G4’s and the pro track from L&B can be hard to fit in. My advice would be to try on the model of helmet you plan on buying because lots of things change from G3 to G4 to G35.

If you have any other questions, Cookie has a description of every model on their website at: flycookie.com .. or check out Cookie’s video below about the G35… 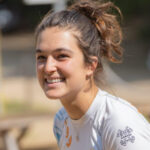 Hi, my name is Coralie Boudreault and I started flying when I was 11 years old. I competed in the tunnel for 5 years before being able to do my AFF course but my ultimate goal was always to compete internationally in the sky. I will finally realize that dream at the next World Championships in October 2022!