… but has become a staple discipline on a regular list of things to do at the dz. Just like freeflying, you don’t start off on big-way sequentials, mixing dynamic flying, flipping shit and flocking with VFS, you have to learn how to sit-fly first.

XRW is no different, it’s important to understand and learn to fly the fundamentals first to keep both the canopy pilot and wingsuiter safe before diving into advanced techniques. This article will cover the basics on:

Let’s start off with what kind of gear is needed. We could dive way way down the rabbit hole of what is technically possible – can you fly with a Velo 84? Yes. Can you fly with a 2.5 wing-loading? Yes. Is it easy? No. So to keep this basic and a recipe for success, we are going to go over what we are looking for from both the canopy and wingsuit side that keeps the workload fairly even without one side having to compensate for the other.

The best canopies for XRW are high performance and in the size range of 62-67. That is the sweet spot. Too small and the canopy tends to fall out of the sky with less forward speed and a faster vertical speed than is ideal to fly a wingsuit with. Too big of a canopy and they have more lift, which can feel “floaty” for the wingsuiter to have to stay with.

There is a range of wingloadings comfortable to fly with for a wingsuit. The perfect WL is going to vary slightly depending on the combination of canopy pilot, canopy planform and size, and wingsuit. The general target range is about 3.2-3.5.

The characteristic we are looking for with the wingsuit is one that can fly with a forward speed that overlaps that of the canopy, without stalling out of the sky. Intermediate-advanced wingsuits tend to work best. Smaller beginner category suits don’t have the forward speed at the angle needed, and advanced race suits frequently have a stall speed that is very close to the slow airspeed needed to fly with a canopy, making XRW very challenging. An intermediate-advanced suit with a good amount of surface area and a relatively slow stall speed is ideal.

Where to fly, where not to fly, and where your “outs” are

Before you go huck it out of a plane, let’s talk about the plan – where to fly (green zones), where not to fly (danger zones) and where to bail. Canopies and wingsuits create wake turbulence (burbles). If the wingsuit flies in front of the canopy, the wingsuit wake will potentially collapse the canopy or destabilize it, changing its trajectory (meaning that the canopy could swerve into your friends). Never fly in front of the canopy. The WS should be flying even with the canopy pilot’s shoulder-level or lower. Consider the lines to be like cheese-graters and stay below them. Additionally, the wingtip vortices of the canopy can “attract” wingsuits. The airflow from bottom to top surface can cause wingsuit / canopy collisions if a wingsuiter flies too closely to the canopy wingtip (it’s happened before).

Highly loaded high-performance canopies are extremely sensitive to harness input, if the wingsuit is too high up by the risers or lines, and even a small harness wiggle (quick left/right from a distracted or excited canopy pilot) is inputted, the canopy will quickly roll left and right. This can be done accidentally even from a glance left or right from a canopy pilot, which would roll the lines right into the wingsuit pilot if he or she were anywhere up there. If you have to bail for any reason – wingsuits go down, canopies go up. A wingsuiter can easily and quickly collapse wings and fall like a rock compared to a canopy. A canopy pilot can tap rear risers and produce much more lift than a wingsuit can easily fly with.

How to put this thing together

There are multiple patterns to get the wingsuit pilot together with the canopy pilot, this one is the simplest which allows for the most room for adjustment. The XRW team will generally be the last group to exit the plane. While maintaining the original jump run, the canopy pilot will exit the plane, delay about 5 seconds then deploy his or her parachute. The wingsuit pilot will have eyes on the canopy pilot, ensure that there has been a successful deployment with any necessary heading correction, then exit.

The canopy pilot should prioritize heading, immediately turning at least 45 degrees off jump run towards the direction the door of the aircraft is on (Otter would be left). Reel in the RDS [Rapid Deployment System] as quickly as can be done smoothly, then un-stow breaks. As the wingsuit approaches, turn another 45 degrees off jump run so that as the canopy and wingsuit meet up, they are 90 degrees off the original jump run.

The canopy pilot is the base and the navigator. At some point in the pattern, like a basic wingsuit pattern, there is going to be another turn to get back to the dz. This can be keyed prior to the turn by the canopy pilot pointing with their hand so that both parties know the turn is coming and can be done slowly, smoothly and together.

Breakoff – generally 5,000k but make sure it is at a predetermined altitude, include this in your flight plan and abide by it.

Things to consider – airplanes such as a King Air might have a faster ground speed on exit than a plane such as an Otter. If a canopy pilot takes a very short delay out of a King Air, and the wingsuit pilot has to wait longer in the door, the lateral separation is going to be more challenging than if the canopy took a longer delay and the wingsuit got out earlier.

Tips for the wingsuit pilot

Guard your altitude. The goal isn’t to get together as quickly as possible; it is to get together safely and consistently, the speed will come with practice. It’s a lot easier to get down to the canopy than overshooting or stalling then trying to get back up. Approach to the side and slow down early! Stairstep your way in closer from the behind and above off to the side. Get on level with the canopy pilot’s shoulder then side-slide your way into your slot. If you slow down early, then you won’t stall your suit when you get there trying to check too much speed at once. When you slide into your slot you should be flying controlled and smoothly.

Tips for the canopy pilot

Be efficient as you can with your RDS but remember – be smooth. The quieter you can be in your harness the better, so take a deep breath and don’t try to rush – let the wingsuit come to you, give a nice key before your turn in the pattern then a nice smooth initiation, be patient with docks, all of it…

Now that you have an outline for the basics on gear, patterns, and safe zones to fly in, go shred! XRW is a super fun discipline. Oh yeah, if you guys are wearing open-face helmets, you can hear each other talk too 😉 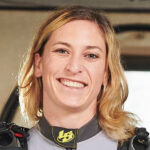 Katie is from many places but currently Salt Lake City, home drop zone Perris Valley. She is a jack of all trades - wingsuiting, freeflying, swooping and BASE jumping.