Recently, in September a few clear nights over Marl Skydiving Club were illuminated by special “comets”…

As early as 2016 I started dreaming of organizing the first freefly night record. But as quickly as the idea was born, it was also quickly discarded. Too many uncertainties had to be overcome to take responsibility for such an event. Four years later the idea flared up again and, after a year of planning, it was actually implemented on 16 September 2021, when 14 jumpers and a cameraflyer boarded the plane at the Loemühle airfield in Marl at around 10:20 pm

Back to the beginning

The first thing to do was to build such a strong team that failure was almost impossible. The team came together at Skydive Marl with the challenge to set two not yet officially existing world records in night jumping on the nights from September 16 to 18.

Now the weather just had to play along… and it did. Three days of sunshine with clear nights awaited the freeflyers. On the first day, September 16, the team rehearsed a 14-way head-down formation for the evening to set the first German, European and World Record in the Night Vertical Formation Skydiving category.

At around 10:40 pm the cameraflyer Wolfgang Lienbacher opened the door of the Cessna Grand Caravan D-FSRT at 4,600 meters. The exit line-up was set up in seconds in the cool, black night sky over Marl. READY, SET, GOOO!!!

From the ground it looked as if brightly shining stars were meeting each other in the sky.

At 2,900 meters, almost everyone was together when Wolfgang Lienbacher simultaneously ignited the pyrotechnics attached to the jumpers’ feet by remote control. A gigantic picture was presented to those below. The formation, consisting of colorful lights, suddenly turned into a burning comet, which broke into individual falling stars when it was separated. A few minutes later, all jumpers landed safely on the specially illuminated landing area of over 20,000 sqm. From the joy of the team that was already hugging each other on the landing field, it was clear that the first world record had been achieved in just one jump. Gundel Klement as FAI referee had the pleasure of officially confirming this a short time later.

The fairy tale continued the next day with a second world record, this time in the Sequential category with 3 points, where the formation of 14 jumpers illuminated the Marl night sky with three different formations within one jump. Only two attempts were necessary for this. The team achieved two Night World Records in just 3 jumps!

Cherry on the cake

Normally the event would have ended with that. Everyone agreed, however, that we could not disappoint the crowd of a thousand that had spontaneously appeared at the dropzone. We could not let the spectators go away without further entertainment. We used the rest of the pyrotechnics and did a show jump consisting of 2 groups that carved opposite each other in head-down. This way the jumpers conjured up a gigantic spiral of fire in the starry night sky.

Three magical days were drawing to a close, three days in which an extraordinary team achieved its ambitious goal. Everyone involved could say goodbye in good health, which was the top priority.

Special thanks go to the main sponsors of the event – the Marl Skydiving Club and Indoor Skydiving Bottrop, to the club members on site for all their help and to all the enthusiastic visitors who motivated us so much to perform at our best. We look forward to a reunion! 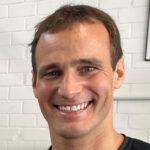 Philipp Exner is a German freeflyer, member of the Marl Skydiving Club and initiator of the German Vertical Records group.

Member of skydiving band Winging it!