18 August 2020 is the 100 year anniversary of the ratification of the 19th Amendment to the US constitution. This amendment gave women in the USA the right to vote.

Countries all over the world were granting women the right to vote during this era and we are so excited to honor this with Project 19. As you all know, we had planned to celebrate the centennial with an epic 100-way WVWR, but we are now looking forward to celebrating the 101st year anniversary with a 101-way Women’s Vertical World Record!!!!

Tune in on 18 August at 10:15 am CDT, for Live Coverage of the Highlight Pro Skydiving Team’s demo to celebrate 100 years of the ratification of the 19th amendment.

In the meantime, we would like to share something with you that we have been working on for sometime now, something that will ultimately contribute to the success of Project 19….

We were inspired to create this app after the Link Up hosted by Dan BC on “visualization”. We realized that lots of people did not have access to videos needed to help them visualize how to fly in large vertical formations. This app is an educational tool just for that. There is a video and a description for every exit slot, as well as approaches, flying the formation, break-off, canopy flight and landing. You can keep up to date with record news, meet the whole team and even apply to join. There are links to brilliant talks by Dan BC, Domi Kiger, Stephanie Strange, Jason Russell and many more.

You can download the free app using the link here (currently it is only available for apple users, but the android version is coming soon). 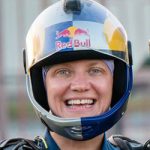 "As far back as I can remember I wanted to be a skydiver."

Amy's ambition to learn the sport began as early as age 13 and continued through her teenage years, until finally getting her first chance at the legal age of 18.   After that first experience of freefall, she knew skydiving would be a major focus of her life. Later that year, Amy earned her skydiving license in her native state, New York. For the next three years, she made time to jump as much as possible while finishing college.   After college, Amy headed west to spend her time practicing the sport at Skydive Arizona. She dreamed of being a professional snowboarder as a kid, but at 18 found an altogether different kind of 'big air.' "After I went for a skydive when I turned 18, I realized it was something you could do all the time, if you wanted. I never looked back," Amy says.   She scored her first sponsorship in 2001 and from there knew that skydiving, wingsuit flying and tunnel flying were going to be her aerial-based career of choice. "I saw a path paved out for me. It was a great feeling. It was like I had no question that I was going to have a good career and a good time."   Fast forward more than a decade and Amy's picked up 11 national titles, five world titles, an astounding 15 world records and counting. She puts her stellar resume down to experience in her sport and having taken part in lots of different disciplines. "Most people hang out in a specific discipline for a while, win a championship, and then stop. I am always fired up about the next new thing to learn and master," she explains.