The first entry in the SunPathlete Spotlight competition …

Today I had the wonderful opportunity to interview Dave Flynn, a member of the Golden Knights Army Parachute Team!

Feel free to check out his interview below:

What made you get into the Army?

I joined the Army in 2006 after high school. I wanted to do a physical job and take a path less chosen. The Army would satisfy that want, and let me serve my country at a time of war. I enlisted as a airborne cannon crew member and served 7 years in the 82nd Airborne Division with 2 combat tours in Afghanistan before joining the Golden Knights.

How did you become a parachutist for the Golden Knights Army Parachute Team?

I was earning my A license at Raeford Parachute center when I saw jumpers landing with “Army” embroidered on their rigs and jumpsuits.  I immediately knew that I wanted to be part of the US Army Parachute Team. I attended Golden Knights Assessment and Selection in 2012 and after about 2 months and 200 jumps, I was selected to be a demonstration parachutist for the black demonstration team of the golden knights. 2 years later I tried out for the 8-way team and have been assigned to them ever since.

What’s the most memorable parachute jump you’ve ever been on?

My most memorable/favorite jump I’ve ever done was when I got to sting a tandem that SSG(RET) Travis Mills was on. He has been a long time friend of mine and he was critically wounded in Afghanistan losing all four limbs. He is now a motivational speaker and owner of a veterans’ retreat in Maine. I’ll never forget that jump.

My favorite competition jump was round 10 in the 2018Wworld Championships in Australia. My team tied the world record of 33 points in a single round and that was the moment I became a world champion in slot. Previously I competed with GK8 as a cameraflyer.

Where have you jumped with the Golden Knights for demonstration events?

ALL OVER THE PLACE! I have been very lucky to be able to travel all over the United States and even as far as South Africa. I’ve jumped into places from parking lots to major air shows and football games.

Do you participate in sport parachuting outside of the army?

I do not. Competing is my full time job, I put all my skydiving effort into GK8, but I will help other teams or skydivers that ask for an opinion or help with anything.

How many jumps do you have now?

Approximately 5,000 jumps. I’ll be the first to tell you that I’m bad about logging jumps.

What other activities or interests do you have outside of parachuting?

I love being on the water. Boating, fishing, or just sitting on the dock. That is my happy place.

What is something about you that few people know about?

I have an identical twin brother named Mark (who also served in the Army). I guess GK8 has a replacement for me standing by at all times.

What are your future goals?

1. Win the 8-way category at US Nationals in September

2. Win the World Meet next year with a 24 average. 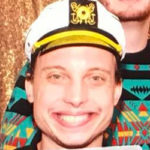 Kyle Rhoades, born in Sioux Falls, South Dakota 1987, 32 years old, currently living and jumping at Skydive Chicago.  334 logged jumps and a C-license C-47679, own a Javelin container with Safire2 149 main and a Tempo 150 reserve.  Been on many small/big RW formation loads. Biggest RW formation attempt is a 20-way zoo dive, biggest successful RW formation is a 8-way at Cornhusker State Games at Skydive LSPC in Nebraska 2010.

I did my first tandem out of Mike Mullen’s King Air at Skydive Adventures, Luverne, Minnesota Independence Day 2005 the Summer before I graduated high school.  The next Spring following my high school graduation I took the static line progression course at Skydive Adventures and not long after become a member of the club and member of the USPA in Summer of 2006.  One other club I am a former member with is Skydive LSPC in Weeping Water, Nebraska.  Boogies I have attended is Dollar Daze Couch Freaks Boogie in Iowa, Redemption Boogie at LSPC, and Mike Mullen’s King Air Boogie at Skydive Adventures.