Overlooking the Red Sea on the Southern tip of the Sinai peninsula in Egypt, Sharm-el-Sheikh is well known as a world-class scuba diving destination. It is not known, however, as a skydiving destination. This was about to change…

Skydive Pharaohs received an invitation from the organizers of the World Youth Forum to participate in the closing ceremonies of the event, with the President of Egypt Abdel Fattah Al-Sisi and the first lady in attendance.

Skydive Pharaohs in turn asked Chris Gay of Canopy Formation Specialists to organize the CRW portion of the event. It was going to be a night CRW jump with lots of pyrotechnics! 😎 Chris then extended an invitation to fifteen CRW dogs from all over the world and fortunately for me, I was one of them.

With the COVID-19 Omicron outbreak peaking, traveling across borders was challenging. In fact, with many testing facilities overwhelmed and confusion at the airlines check-ins as to what the requirements were, it was a miracle that all the team members made it to Sharm-el-Sheik, specially myself. I had already been turned back at the check-in in JFK airport when the spontaneous interventions of one of the ladies supervising the line of passengers reverted this and allowed me to board the airplane. 🙏

The demo itself was going to be a one jump affair, but we had three preparation jumps organized for the day before the event. We did the first during the day and out of Skydive Pharaohs brand new (really) Cessna Caravan to test how the formation would fly with the assigned canopies (PD Lightnings loaded at 1.1 lb/sq ft). We followed it with two night jumps out of a CASA 235 belonging to the Egyptian Army. These jumps allowed us to iron-out the pyrotechnics’ sequencing and separation with other groups of skydivers. Jumping from 9,000 ft we consistently completed the formations in 3,000 ft leaving plenty of altitude for positioning over the desired spot for the show. The 16-way diamond built and flew smoothly and spirits were high. We were confident in the success of the next day’s demo.

The Demo Jump and its challenges

The next night things didn’t look so rosy. At the airport, we learnt from the tower winds were 35 knots at 9,000 feet and “only” 19 knots at 3,000 feet… On the ride at altitude we all felt some bumps in the airplane. Not terrible, but something able to bump a 22,000+ lb airplane sure can bump a canopy. Naturally, nobody said anything. Must’ve been that “shut up and jump” thing.

After orbiting at 8,500 ft for 30 minutes waiting for the signal from the organizers, it finally came and off the ramp we went. The formation built smoothly and everyone relaxed… until we reached 4,000 ft. The canopies suddenly seemed to have their own ideas as to where to go and everyone, in particular the wings, had a difficult time staying in the formation. The turbulence only increased as we descended and the row 4 wings had to let go, calling a break-it-down that went surprisingly well, given the circumstances. The only potentially dangerous incident occurred when the pyro bracket of the right row 4 wing got caught in my canopy. Fortunately, the bracket holding the pyrotechnics and the corresponding shoe parted and I was free! I admit those things were bad for my nerves. 🙃

People in the 9-way core held and continued flying the best they could through the bumpy air while the rest of us resumed a loose non-contact formation around it. Chris Gay fired the pyro by air-to-air radio and from the ground the public saw a beautiful show. Demo saved! 💪💪

Not soon had we landed that word came that the president, off program, wanted us on stage. We were rushed through security as they body-checked us. Not sure what they thought of the multiple LED stripes attached to our legs, radios hanging from our necks, etc., but they let us through. The president proceeded to thank all the skydivers for the amazing display and commended us for having jumped in spite of the windy conditions. No kidding. The public applauded and we were hushed out so the ceremonies could go on. Fortunately, nobody seemed to realize that one of us was standing in front of the president with one shoe missing. A breach of protocol, probably. 🤣

In all, it was a uniquely enjoyable experience. It is always nice to meet friends of many years from all over the world and jump together. Kudos to Ahmed Biondy, Haytham Abo Ouf and all the people of Skydive Pharaohs who worked tirelessly behind the scenes to work out potential snags before they could become problems. I am looking forward to the next time!

Participants in the 16-way 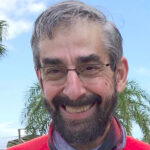 Eduardo Guillén started jumping in Argentina and now he lives and jumps in the US. He has 3,000 jumps of which about half are CRW. In the process, he visited awesome places, met interesting people, made many friends and earned several national, continental and world records in the discipline. Not bad for someone who initially hated CRW!