The attempts for the new Sequential World Record Night Formations took place in November 2021, organized by the “Prince of Darkness” South African Steve Woodford with the help of his lovely sidekick Maria.

Kevin Gibson knighted Steve with the dark title after his many years of experience encouraging skydivers to build formations in the Dark.

On a glorious clear “Blue Skies” day 28 jumpers arrived at Skydive Elsinore to begin the process of creating a team. Some of them traveled from far away places like Russia, Argentina, Lithuania, Ukraine and Mexico.

Some were first timers to Steve’s “Moonlighter” experience. 🙂

Steve developed the ever evolving plan years ago on the heels of famous organizers like Jerry Bird and Steve Fielding. The Plan includes an impressive list of night attempts and official world records, the first taking place at Skydive Elsinore in 1973.  His personal favorite was the Night World Record 64-way that took place at Skydive Arizona in 2017.

This year the plan was a 30-way Full Break Sequential Record but ultimately had to be trimmed down.  Participants received the detailed information months in advance so each person could prepare to dress for success as to mitigate the potential risks involved with building the sequential formation, tracking and landing in the dark.

Contrary to what most people believe, the most impressive statistic is that there have been “Zero Fatalities, Zero Canopy Collisions and only one minor injury” during the years.

16 skydives were scheduled for the 4 day/ night event, the second day including a twilight jump to test the oxygen system, camera equipment, LED sector lights and landing practice. Not one, but two world class camera flyers were enlisted to capture the record.  Andrey Veselov and Craig O’Brien (who was a first-time Moonlighter).

They arrived with the latest in lighting technology and quickly began collaborating on a plan in which they lit the formation in a way that would illuminate the jumpers from different angles.

The Moonlighters were one of the first to use “LED” technology versus Chem lights to guide the participants to their sectors.

On Day 1 Woodford had a major challenge to deal with – three of his “Solid Base” jumpers for various reasons could not make it to the event which left him scrambling to fill the difficult slots. The formation included the full break moving into a six way donut for the second point, and this would prove to be a bigger challenge than anticipated.

Day 2 included a twilight skydive and one night jump that didn’t quite go as planned. Due to a mechanical concern on the lead aircraft jumpers bailed out while the trail plane landed with all on board.

It was decided to cancel the night load until the issue was resolved.

Day 3 was a long day, and night, for the newly formed team. Three jumpers made the decision not to continue and three new participants joined the load. A total of seven skydives were made including a twilight jump and two record attempts that proved to be unsuccessful.

Day 4 began with anticipation and determination as this day/ night would be the last opportunity to accomplish the challenging record.

Many of the participants made changes to their travel arrangements so they could stay for a second night attempt if needed.

Two of the jumpers that had pulled off the load joined the ground crew efforts by lighting the landing area and encouraging their teammates. Scott Macario from Cross Keys who participated on four previous night world records remained calm and collected stating he “loves the challenge and it’s just different at night”.

With three full break formations during the day elevating the team’s confidence, the debrief and dirt dive of the last attempt felt energetic. The team was prepared to get it done.

Steve’s uplifting speech about records “always happening on the last day” encouraged the 26 jumpers to dress for success and carefully prepare the personal lighting needed to safely fly their canopies in the moonlit skies.

The first point built with quiet precision, while the complete break in the dark was noisy and levels were changing in the base. The team quickly regrouped and the formation built the second point from the center out with seconds to spare.

The cheers were heard in the landing area as jumpers came back from what hopefully would be a completion!

Videographer Craig O’Brien provided the on-site Chief Judge Judy Celaya with images and video from both formations. As the Moonlighters waited apprehensively outside the judges room, Steve and Maria emerged with Corona Beers in hand signaling the New World Record! 💪

The participants were clearly relieved and the DZO, GM, pilots and staff joined in the celebration.

Despite all of the trials and tribulations it was a record to be remembered! 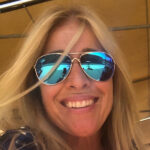 Mary Tortomasi is an enthusiastic US skydiver, based in Perris, California, with over 4000 jumps under her belt.