February 28th is the birthday for, arguably, one of the greatest innovations in the advancement of skydiving!

No, I’m not referring to the 3-ring cutaway system. Sorry, Bill Booth. While Bill IS responsible for some of our sport’s incredible equipment advancements, the inventor of this particular innovation was named Wallace Carothers. If you’re a fan of hiking, camping, fishing, sailing, climbing, BASE jumping, paragliding, SKYDIVING, or virtually every other outdoor activity, you may appreciate the important contribution that Carothers has played in your life.

Born in 1896 in Iowa, Wallace Carothers was the oldest of four children. As a child, he was fascinated with tools and mechanical devices, and he spent hours experimenting. Attending public school in Des Moines, Iowa, he was a conscientious and curious student. In 1915, Carothers entered Tarkio University in Missouri. Initially majoring in English, he switched to chemistry, where he excelled. He was so talented in chemistry that he was teaching the senior courses at the university before he had even graduated.

While still at Harvard, Carothers was approached by a company named DuPont. Founded in 1802 by Eleuthere Irenee du Pont, DuPont Chemical Company was initially a manufacturer of black powder and other explosives until the 20th century when it began making other chemicals as well. In 1928 DuPont did something unusual, especially for a business at that time; it opened a laboratory for basic research. One of their main interests was developing synthetic fibers, which had never been done. DuPont felt the quickest way to get to industrial applications was by looking into the fundamentals of that field. They lured Carothers from Harvard with the promise of pursuing his own research without the burden of having to teach. Initially unsure about moving to DuPont, it proved an irresistible opportunity for Carothers.

First, Carothers and his team looked into the acetylene family of chemicals, and by 1931 DuPont was producing synthetic rubber. This rubber was called neoprene (you’re welcome, Scuba divers!).

Leading up to World War II, and due to political and trade troubles in the Pacific, the United States was struggling to import silk which, at the time, was a significant import from Japan. DuPont wanted to develop a synthetic fiber that could replace silk. Carothers and his team tackled the problem. On February 28, 1935, under the direction of Carothers, his team produced a half-pound of polymer from hexamethylenediamine and adipic acid, creating polyamide 6-6. Due to its high melting point, it was challenging to work with, but DuPont chose to develop this polyamide commercially. This became the world’s first completely synthetic fiber.

Carothers called this new creation “Fibre 66”. “Fibre” is a thin thread of a natural or artificial substance that is used to create cloth or rope, and “66” since both monomers are used to create the superpolyamide (hexamethylenediamine and adipic acid) each containing 6 carbons atoms. The DuPont management did not think that the name “Fibre 66” had enough advertising appeal, so a naming committee was appointed, and they came up with almost 400 different suggestions. The name “Duparooh” was proposed, but that name did not convince a majority of the decision-makers. The acronym was considered nothing more than a joke because it stood for “DuPont Pulls a Rabbit Out of a Hat.” Names like “Dusilk,” “Rayamide,” and “Silkex” were proposed, considered, and ultimately rejected. Someone suggested “Delawear,” a homage to the US State in which DuPont was founded, and this new material was being produced.

Eventually, one of the higher-ups proposed the name “Norun.” That sounded good because it suggested that the material did not ladder (“no run”), but this name was rejected because… it was technically not accurate. “Norun” was changed to “Nuron” because “nu” sounds like “new.” There was, however, a danger that it would be confused with the nerve toxin “Neuron.” DuPont replaced the “r” with an “l” and the “u” with an “i,” and then eventually replaced that “i” with a “y.” VOILA! The word “NYLON” was coined.

The name was designed to sound good, but it didn’t really mean anything, even though claims were subsequently made about the meaning for which the name was allegedly based. One of these claims is that “NYLON” came from “New York” and “London.” The claim was that two chemists thought up the word while on an intercontinental flight from New York to London. Supposedly, they looked at their tickets and saw “NY to LON” and thought it sounded good. An alternative claim is that DuPont chose the name “NYLON,” intending to provoke the Japanese industry, which would be exporting less silk due to the new artificial fiber. This particular story claims that “NYLON” stands for “Now You’ve Lost, Old Nippon.” “Nippon-koku,” in Japanese, literally means the “State of Japan.”

Regardless of how nylon got the name, its impact on skydiving, decades after it was invented, is clear. From the top skin of your pilot chute to bottom of your leg straps, and pretty much every cloth part on your skydiving gear. Jumpsuits, pull-up cords, elastic keepers, jerseys, wind blades… Even cordura is made of high tenacity air jet textured nylon 66 filament yarns. The thread used to sew everything together! Nylon is arguably one of the most important inventions in the sport of skydiving. 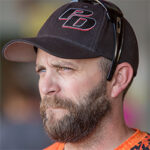 Originally from Anchorage, Alaska, with a background in Emergency Medicine and Occupational Health and Safety, Ben currently lives in Texas and is the dropzone manager at Skydive Spaceland Dallas. With over 10,000 skydives, Ben has attended, both as a participant and an organizer, most of the major vertical formation world records since 2013. He is currently working on pushing the limits of Extreme Relative Work (XRW). When he is not flying parachutes, you can find him flying paragliders and miniwings, SCUBA diving, or BASE jumping. If you want to get on Ben’s good side, he enjoys IPAs.