31 years ago, for the TV special called The Ultimate Challenge… 2 bi-planes flying in formation, deployed drogues, putting the aircraft in a vertical dive towards earth.

Kevin Donnelly and Jim Wallace exited and flew over to the other bi-plane and docked, landing after a skydive and never using a parachute.

This was the amazing stunt that inspired the very cool recent attempt to up the ante on the Red Bull bi-plane swap, with Luke Aikins and Andy Farrington. They attempted to do the Plane Swap with no pilot in the aircraft once they left to switch planes and used a very innovative air brake instead of a drogue. On practice jumps they accomplished this double aircraft plane swap but unfortunately had an air brake issue on the day of the televised stunt.

It was full of challenges to film a stunt of this magnitude in 1991.

Kevin Donnelly performed a solo hidden rig, fall off of a bi-plane stunt for an IMAX movie called “Flyers”. I think this may have led to this dual bi-plane stunt idea. I’m not sure if it was, but I would not be surprised if it was Kevin’s idea. Kevin Donnelly was working full time in the movie and TV industry as a producer. At the same time he and freefall cameraman Ray Cottingham were very active in Hollywood projects involving skydiving for TV shows, commercials and feature films.

Norman Kent and I were hired to be the freefall cinematographers. This is before the days of quality portable video. We had to shoot 16mm movie cameras for the TV show and all the footage on the planes had to be 16mm film. It was a huge project to film this stunt. I was in charge of getting special mounts made for all the cameras on the planes. I recall 2-3 movie cameras on each plane and 1-2 still cameras.

Little details become big problems to solve in 1991. For instance a 36 exposure roll of still film would never be enough pictures to capture the action of the skydivers departing each aircraft and docking on the other aircraft. I selected still cameras that could be outfitted with special 250 frame exposure backs. All the still cameras and movie cameras had to be triggered remotely by the pilots – who had a lot going on already! I recall mounting toggle switches on the instrument panel of each bi-plane so that the pilots could just flip all the cameras on as the planes began diving straight down to earth with their drogues deployed.

Norman Kent and I exited a Cessna flown by a famous Hollywood cameraman named Jim Gavin. We exited when the bi-planes were in their dive to get air to air footage.The two bi-plane pilots were also very famous stunt pilots Craig Hoskings and Jim Franklin. Jim performed at airshows with his bi-plane. Craig did a lot of Hollywood pilot work with helicopters filming stunts and movie scenes. He was also the pilot sponsored by BOSE and could land a special bi-plane upside down since it had wheels on the top and bottom of the aircraft. Definitely a ‘Who’s Who’ of pilots, as also were the jumpers and skydiving cameramen.

Originally Kevin Donnelly turned down the skydiving stunt because they would not pay the fee he wanted. Unfortunately for the production company the jumper they selected (Gerry Meyers) broke his leg on one of the first few attempts. Jim Wallace was the other skydiver. So the producers had to agree to Kevin’s fee. I believe that Kevin and Jim were able to complete the double bi-plane swap on their first try. Making a skydive but landing in a different plane! Very cool… and no packing required!

Norman Kent and I exited the third Cessna being flown by Jim Gavin, when the bi-planes were in their dive to get air to air footage, and we both flew to an assigned aircraft to follow the skydivers switching planes and docking. I recall when Kevin docked I was quite near him and as I moved toward the bi-plane it began to pull up which was disappointing because I could no longer stay with the airplane’s slower descent. I had entertained the idea of just touching the wing tip while capturing Kevin wrapping his arms and legs around the wing struts but, all of a sudden when I was within a few feet of the wing tip, it began to level off and fall too slowly for me to stay with it.

Kevin Donnelly was a superb skydiver and accuracy competitor. He jumped with 35mm movie cameras occasionally but relied on Ray Cottingham and me when Ray was unavailable or when he needed two cameramen. On this job, it seemed he was the brains behind the drogue systems that were installed on each aircraft to establish the vertical fall rate that a skydiver could match. I don’t recall them ever having a big problem with the drogue working as needed, right from the start. Mary Wolfrank and Joe Sanchez helped Kevin with the rigging.

The “Ultimate Challenge” was a very big deal in its day, as was this one-off, TV Stunt special. I was proud to be part of it. Filming with cameras mounted on both aircraft in 1991 was one of my most difficult filming challenges in my career. This TV stunt show special was great publicity for our sport. 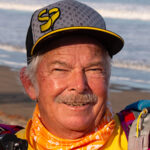 Tom has been a legend in skydiving photography since he started jumping in 1978, and started taking photos of the sport the same year.

His lengthy career involving the stunt coordination and filming of skydiving, BASE jumping and hang-gliding has included four James Bond movie sequences, Point Break, the Rise of the Silver Surfer, George Bush’s AFF, and countless commercials such as Sony, Mountain Dew and Burger King. Tom produced, directed and filmed a movie called ‘Over The Edge’ about skydiving, BASE jumping and hang-gliding, which won first place in every category entered and many additional awards.
Tom was one of the first skydivers to jump with video equipment (it was a 22 lb chest mounted VCR and a separate camera), and the first to transmit a live skydiving video at the iconic demonstration jump at the Opening Ceremonies of the 1988 Seoul Olympics.
National Geographic TV has done three shows featuring Tom’s work. He was awarded the Gold Medal for Meritorious Service from the United States Parachute Association and was inducted into the Hall of Fame in 2019.