“If your actions inspire others to dream more, learn more, do more and become more, you are a leader.”

If you skydive long enough, you will see the worst and the best. Friends will pass away and others will become fathers and mothers. Some will stop skydiving and others will dedicate their entire lives to the sport. Nevertheless, each and every person who has been a part of the sport has their own experiences that have in one way or another changed their lives forever.

My skydive story is still unfinished, but it is safe to say it was almost a short one. In 2015, my mentor Michael Vaughan died in a tragic CRW accident. Following his death, I was in turmoil. I had many ups and downs and tried to fill my emptiness with BASE jumping, partying, and surrounding myself with good people. After each season I told myself “this is the last season” and then “I will quit skydiving altogether.” I had lost my passion and was just compensating for how down I felt with adrenalin.

“Just because your life changes, doesn’t mean your deepest passions have to.”

The reason I started skydiving was because I wanted to become a skydiving photographer and after Michael’s passing I lost that drive completely. If you asked me before I met this man if I had ever considered becoming a skydive photographer, I would have laughed and said not in this lifetime.

Bruno Brokken has given me a second chance at doing skydive photography. Through his achievements and history, he has inspired me to push myself to a standard I would have only dreamed of before. To live such an amazing life and inspire so many with humbleness is truly someone to look up to. Without him I would not have the same drive and passion for skydiving photography that I have connected with once again.

Bruno was born on the 16th of March 1963 in Ath, Belgium. His first jump was in 1980, he has since accumulated over 25,000 jumps and calls Skydive Empuriabrava home. Bruno is a competition skydiver as well as photographer, and his best results in competition are as follows:

“An all-time great, master lensman and person. His lifetime dedication to the sport has been hugely instrumental.”

When not excelling in competition, Bruno has photographed many events in skydive history such as:

Bruno is one of the longest-running Sun Path sponsored athletes ever. With competing and photography, Bruno also qualified as an AFF instructor in 1987 and also went on to be a tandem instructor. Though he now focuses his time on photography, he is the still coaching new and old instructors with helpful insights. He is the hand that keeps on giving.

¨Sun Path is more than my sponsor, they are a lifelong friend¨

“I jump with a Javelin and have for many years. Everything is where it needs to be. I feel very comfortable and knowing the latest technology is constantly being added is why I will continue to jump with Sun Path for many years to come. ¨
-Bruno Brokken

“Bruno has been and still is a pioneer in our sport. A gentle giant and mentor with no ego, always willing to lend a hand or give advice. He has done things in skydiving most of us can only dream of. “

“Not all heroes wear capes, but some wear parachutes”

16th of July 1990 in Moorsele, Belgium… Sjarel gathered another 9 people to make a naked 10-way to celebrate his 500th jump. A kissing and cuddling jump with 5 boys and 5 girls. 2 cameraman; Bruno Brokken and English John.

The 10-way; Sjarel Boons, George Pilkinton, Alain Vandevoorde, Wingy and South African John, Wendy Smith, Allison, Pam Pullen, Helen Harber and Susanne. A linked exit was planned, but it funnelled and Susanne got underneath the formation, where her pilot chute fell out of its pocket. Her canopy opened and she was catapulted through the formation. She hit George and Sjarel the hardest because they were still holding hands. Sjarel was hit hard in the face and had blood all over, George was knocked unconscious and tumbled down and away. The skydivers all dived out of the way to find a safe spot to pull. Bruno though noticed that something was wrong with George and set for a fast dive towards him. Bruno was able to catch up, stabilize him, and pull his parachute. George stayed unconscious under his canopy and landed with brakes still stowed but onto the grass in the airfield. George and Sjarel were picked up by an ambulance. Sjarel’s face was stitched and bandaged. George woke up and was unharmed.

10th July 2019 as I go to type this next remarkable rescue by Bruno a group of young skydivers exit over Empuriabrava. There has been a misunderstanding from the jumpers about the wind strength and direction and three students land off over town. If anyone has been to Skydive Empuriabrava, they will know how serious the situation is for jumpers landing off over town. I was only alerted (I was in the hangar) because of Bruno’s text messages across the work chat.

Bruno: Twin circling over our house… are they looking for someone?
Work: 3 students
Bruno: Are they located, or can I help?
Even when Bruno is enjoying his time off from the drop zone, he is still willing to help. This is the true natural reaction of a noble person.

Bruno’s next act of heroism has been difficult to obtain the dates and names, but I will recount to the best of my knowledge…
The morning winds had been strong from the north and there had been no jumping. A few hours had past and it seemed as if the winds had calmed down (again if you have been to Empuriabrava, you will be familiar with tramontana winds. No wind to 30+ knot winds in a few moments). An inexperienced ground crew member lifted the jump restriction and let a plane of jumpers go up. Bruno realized what was happening but it was too late and the jumpers had exited the plane. Under canopy, the tramontana winds came very strong and blew the jumpers under canopy out to sea. With no second thoughts, Bruno gathered his surfboard and disregarded his own safety being in the sea with tramontana he raced to the beach and went straight to work rescuing as many skydivers as he could.

“Bruno has been a fixture in Empuria forever. Anyone who has ever been to Empuria remembers him either as their AFF or tandem instructor or as the video guy. What the locals don’t appreciate is how well he is respected by the rest of the world for his amazing images in beautiful places. All this — and he is friendly and super-approachable.”

Bruno is loved by his partner Gaby Meis and the worldwide skydive community. He has contributed to the sport through Leadership, Competition, and Photography-Videography.

There are many counts of history that can be written about Bruno Brokken but as always it is best hearing them from him yourself over a beer after jumping. So, when you’re in Empuriabrava look for the smiling Belgium with a beer in his hand and prepare yourself for an amazing discussion of skydiving.

It is a waste of your time and resources to merely aim to ‘do well’ in your career, your purpose must be to dominate your field – just like Bruno Brokken. 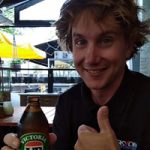