The latest entry in our SunPathlete Spotlight competition – to profile a Sun Path sponsored athlete with the chance to Win a Javelin.

Tamara Bartlett interviewed Maxine Tate, Flight-1 Coach, World FS Record holder and made a beautiful mini-magazine All About Maxine… You can download the full pdf here or read below…

Maxine Tate has a Secret

Maxine Tate’s reputation precedes her. The vastness of her list of accomplishments overwhelms the reader while scrolling through her Flight-1 bio page.

If you’re not familiar, she started skydiving in 2004 and promptly starting winning U.K. National Championship FS 4way and 8way competitions from 2005. Throughout the 00s, she helped set National records and World records for women’s largest FS formations, as well as becoming a competitor at the World Championship of Skydiving in FS. Starting in 2011, Maxine switched to canopy related disciplines, setting more records in canopy piloting this time, as well as competing on the international stage for Team GB as one of the very few female swoopers at world level. Not to mention she also threw in a 2way sequential CRW National Championship. The entire list conjures feelings of both inspiration and bafflement. How does she do it?

You might be thinking, “She must be a natural; skydiving is easy for her.” However, after talking to Maxine, it becomes clear that that’s just not true. Want to know how she does it? Great, because Maxine Tate has a secret and she wants to shout it from the mountain tops (because hiking is one of her hobbies too).

While Maxine Tate makes skydiving look easy, she does not hide the fact that she’s worked very hard to get to where she is today. Fortunately, she’s more than happy to share some of the pieces of wisdom that got her this far in such an outrageous sport.

“Recognize that you’re permanently learning”. When I asked her, ‘Do you ever feel silly or self-conscious, when, as a professional skydiver, you’re learning new things?’, she said” I don’t think you look silly when you go out and try something new. Learning and trying new experiences is not remotely silly.” She followed with a favorite quote, “I’m unbelievably okay with not achieving my goals. I am not okay with not trying.”

She says if there’s one thing she could do for her students, it would be to rid them of self-doubt “so that they can see what they’re capable of, the way that I see them when they come to me”. She emphasized that sometimes the key to learning is seeing what went well, instead of immediately jumping to what didn’t go well. By focusing on the positive, you can start to recognize and appreciate your potential.

Not delivering on goals that you set for your own benefit is okay so long as you recognize it, own it, and use it to get better. Maxine quoted a podcast she was listening to “‘There is an intrinsic value in human error’ and I truly believe that. You can make mistakes and fail as long as you grow from them and use them as motivation to improve.”

You Have to do the Work

When asking her about her preparation for approaching a new discipline, she said “The most important thing for me is to put in the due diligence. Do the work. Train hard. And whatever will be, will be.” She reflected that failure is not generally a lack of performance at game time, but most likely not achieving the amount of training she intended to do beforehand. When she’s prepared, her self-doubt is gone. As soon as she jumps out the door she is laser focused: “Knowing as soon as I’m out of the door, I’m back in the flow. I’ve done this in training hundreds of times; I’m going to do it again. Familiarity breeds confidence.”

Practicing What She Preaches

I know what you’re thinking. “Maxine Tate is a world class skydiver. Surely, she’s beyond her own advice at this point.” However, you are wildly incorrect. Maxine practices what she preaches by putting her advice into action all the time.

Is she still continuously learning?

Yes! Maxine has taken up speed skydiving, qualifying for the World Parachuting Championships next year. Case in point with the speed skydiving, she’s going to have to learn to fly head down in a slick suit. She says, “I have no idea whether I’m going to be good at it or not. I could suck royally, I could crush it. Most likely it’ll be somewhere in between.” Do the work. Train hard. Whatever will be, will be.

“Do the work. Train hard.
Whatever will be, will be.”

Does she ever fail?

She says that she fails every day. She told me that after she and I had dinner for this chat, she drove by the grocery store on the way home and got herself some brownies. “Epic fail on the healthy front” was her reflection on that.

How does she circumvent self-doubt?

In her mind, she’s more nervous going into a competition round if she hasn’t put in the amount of training she believes should have to feel completely at ease with what she’s doing. “In the years I’ve put in all the hard work and I’m ready, I don’t feel the nerves.” She eliminates the self-doubt by being relentless in her training and preparation.

Not only is Maxine living her advice, she’s always seeking out ways to share her message: “You don’t know what you’re capable of unless you go out there and try.” She’s constantly working with every skill level of jumpers, spreading this message by coaching canopy courses with Flight-1, load organizing, and taking the time to deeply listen to and chat with any curious skydiver.

Another one of the ways she’s currently doing that is being part of the Women’s Skydiving Network (WSN) demo team. When asked about it, she says she hopes it can inspire not just women in the sport, but all women. “Lots of women can look at female skydivers jumping into a stadium and think ‘How amazing is that; and be inspired by that. Demos are such a perfect platform to reach people outside of skydiving and share our passion and message,” she said.

Finally, Maxine uses her platform of being a sponsored athlete to spread her message. If not for sponsors, she acknowledges she couldn’t be as visible and prolific in the sport. Thus, she uses interviews like these as a channel to reach her audience, thanks to Sun Path.

So, for Maxine, why Sun Path and the Javelin?

Maxine has loyally jumped Javelin Odysseys since 2006 as a regular skydiver because she loves the containers. She only became a sponsored athlete around six years ago, but she was bought in long before that. When talking, she made it clear that she only represents gear that she supports 100% because people can feel it if you’re not entirely authentic about the product. “I’m a Sun Path athlete for life,” she says. In addition to loving the gear, she is a huge fan of the company itself. When asked how Sun Path supports women in the sport, Maxine emphasized that Sun Path is female-owned company and that the owner, Pat Thomas, is a great proponent of women in the sport. “Everybody at Sun Path is like family. They are an extraordinary bunch of people. They really care. At Nationals I took my rig in at 5pm with a repair that needed attention. The next morning my rig was waiting for me at the dropzone, I never missed a beat. I’m very grateful to have their full support and encouragement.” 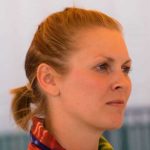 Tamara started skydiving in 2014 and has been chipping away at not-sucking ever since. She focuses primarily on FS flying, whether that's competition, coaching, or load organizing. Tamara competed in both 4way and 8way at Nationals the last two years (taking home a silver in Intermediate 4way this year!). She loves teaching newer skydivers to embrace tummy jumping and always get a thrill from load organizing skills camps or at boogies. While her skills aren't bad, she's best recognized for her neon gear which got her the nickname #colorbarf.