Morgan Mackay interviews WS champion Chris ‘Cruza’ Geiler, who has dominated the world of Performance Wingsuiting since he stepped onto the USA nationals podium in 2015.

A world champion, a father and a hard working tandem master, he has won or placed in every competition he has entered, including the FAI World Cup and Championships. Last week I caught up with Cruza for a chat about what it really takes, not just to stay at the top, but how he balances a family life in a highly competitive yet underfunded sport.

Cruza grew up in Australia and spent his teenage years racing bicycles on the road and in the mountains. In 2005 he left home as a young man seeking travel and adventure. His trip never really ended and he figured out how to work his way around the world crewing luxury yachts. In 2010 he discovered skydiving, and slowly but surely his inner athlete re-emerged in a new and unexpected sport. He had no idea about competing or making a life in skydiving. He just knew he loved to fly and wanted to do it more. Like many, he had seen people fly from mountains and it became a dream he changed his life to pursue. His holidays kept taking him back to California. He loved jumping there and had fallen in love with an American girl.

It didn’t take long until he decided to move to America and skydive full time. Make a living doing tandems and playing in the sky with his mates: that was his plan. It’s one that many people reading can probably relate to. But Cruza had grown up racing, and one day he found out he could race wingsuits.

“It wasn’t until later in the summer of 2014 someone told me there was a wingsuit performance competition. I didn’t know anything about competing in skydiving, I didn’t even know what a FlySight was. But I thought that I could fly fast so I turned up and gave it a shot”

Cruza didn’t have a FlySight to tell him where the start window was. So he took a chest mount altimeter and drew on it with a black marker.

“I think I came 5th in that first comp. I won a FlySight”

That first competition re-ignited a competitive streak in Cruza that hadn’t had an outlet since his teenage years of racing road bikes.

“ Everything that I’ve ever done I have wanted to do it better, when I got that FlySight and could see my data, I just wanted to go faster on every jump”

He was hooked on racing and wanted to go faster and win everything.

That summer I was jumping at the Parachute Center where Cruza worked and trained. I remember he was doing tandems all day and wingsuit solos all afternoon. He made closing loops and sold them in packs of 3 for $5. “When I sell 3 packs of closing loops that’s one more training jump.”

He worked at REI (an outdoor equipment store) in the evenings. People sometimes laughed at his closing loop business or said he was too serious doing all those solos.

But it paid off. Less than a year later he was placing in every performance competition he could enter. He was also attracting attention from the sport’s biggest manufacturers. He started working with them to develop their gear, and over the next years became a part of pushing the progression of performance wingsuiting to where it is today. If you fly a wingsuit from the world’s biggest wingsuit manufacturer, its design was probably influenced by Cruza.

At the top level, pilots are pushing suits harder than ever, going beyond the limits of what we used to think was possible. Pilots are looking beyond traditional skydiving equipment. There has been a rapid proliferation of wingsuit specific canopies and now people are starting to see the whole rig needs to change too.

“I was first drawn to Sun Path because they were the only manufacturer developing a Wingsuit specific container system.”

The high performance wingsuits have large arm wings and are highly pressurised. This can make it hard to reach the BOC of a normal container. Combined with a bigger burble, deployment is more demanding and complex than ever for the pilot. Sun Path have simplified the deployment issues for wingsuit pilots by producing the JAVELIN AURORA, the only container that has been specifically designed to maximise performance and safety for wingsuit pilots. The container is longer and more streamlined. The BOC has been moved much lower to a position that is easier to reach. The main deployment bag and tray are also totally different from what you would see on a normal rig.

“The main comes out in a much cleaner fashion, allowing for the horizontal movement of a wingsuit and the container opens up to be flat – much more like a base rig.”

The last few years have been a whirlwind for Cruza. Making a new life in the USA, getting married and becoming a father. He works full time to provide for his family, trains hard and travels the world to stay on the top of the podium. Cruza is frank about the challenges.

“Becoming a father changes everything. It is pretty hard to justify spending a couple of hundred bucks a day training for a sport that doesn’t pay the bills. Often there isn’t any prize money to cover the travel expenses let alone the training. I am always going to want to do better and to do that I need to train a lot.”

Cruza admits that his wife Reina has put up with a lot and it takes a special kind of person to marry a professional skydiver. She has stood behind his choices from the beginning, but it can’t be avoided that the financial demands of skydiving place a limit on his progression.

“I feel like I can only train enough to maintain my level, when I know I can fly better if I could train more.”

Chris also thinks that performance wingsuiting really doesn’t get the attention it deserves. Wingsuiting is by far the most well-known aspect of parachuting to non-skydivers. Yet, when it comes to competition time, it is overshadowed by the more established disciplines.

“Every year at Nationals, Wingsuiting is the last event and everybody has left before our comp has even started. Awards ceremony looks like a ghost town.”

However, Pat [Thomas] from Sun Path was there this year.

“She stood up for us and said it was BS – we trained just as hard as everyone else and deserved the same recognition.”

Chris recognises that support like this and his relationships with his sponsors is one of the things that keeps him in the sport.

“I love what I do and that’s why I keep coming back. For me it’s an opportunity to be a part of something more than myself. I love being fully involved in the sport. Helping to develop equipment and train the next generation means a lot to me. It’s pretty cool when I look around and can see my contributions in the gear people use or in people I taught to fly. The sport is moving so fast it’s very exciting to be a part of.”

Cruza has been putting his money where his mouth is and works hard to bring more attention to the sport. His work ethic, polite demeanour and humbleness show in his regular mainstream media appearances. He is bringing a great image to a still new discipline. Chris is of the opinion that the sport can benefit from going mainstream. With the public already so aware of Wingsuits from base jumping he thinks that Wingsuit competition in skydiving is one way to convert that awareness into a more mainstream following and bring some dollars in for everybody.

“If our sport is going to grow we need a way of relating what we do to the general public. We need to give them athletes they can follow and support and relate to like in other sports.”

Cruza reckons that this kind of competition is more important to the sport than people may realise. It is driving the rapid evolution of wingsuiting. By putting the world’s best pilots into a competitive environment, you are creating a situation that drives innovation and progression. Athletes and manufacturers working together, competing to win medals has driven every other sport to progress. Wingsuiting is no different and these benefits are flowing down to every recreational jumper in the training they do and in the gear they use.

“I feel lucky that I can get results and push myself to the limit in the skydive environment which is relatively safe. I can go 100% to the max there. My sponsors don’t pressure me to put out social media content or take risks, I just fly as fast as I can. When I go fly in the mountains I enjoy all the benefits of the training and technology we have discovered in skydiving competition. But I don’t feel I need to push the limit there. I just fly for fun”

For the future, Cruza plans to keep turning up to work every day, and to keep winning medals.

Good luck Morgan with his entry in our SunPathlete Spotlight competition 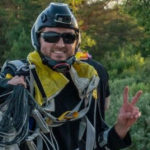